NICOLE'S REVIEW: Plus One by Elizabeth Fama 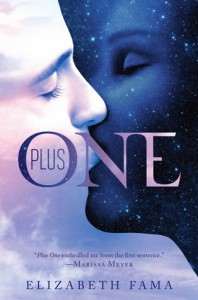 Sol Le Coeur is resigned to her fate, working at the factory and flunking school. She's classified as a Smudge, and in an America divided into Night and Day it means that she lives, reads, works and basically comes alive during the night. She's fine with that. What she isn't okay with is her grandfather dying without ever seeing his granddaughter. So brave, impulsive Sol hatches a crazy plan that involves maiming herself, getting dragged to a hospital then snatching her brother's baby. Her plans are derailed when the Ray - it's what the day people are called - who treats her reports her to the authorities. That same Ray, named D'arcy, helps Sol run from the authorities and they find themselves uncovering a government plot to control the Smudge population and the conspiracies start to unravel.

I've never actually read Elizabeth Fama's other work, Monstrous Beauty, but I do own a copy of the book. (Hello, book hoarder.) So I was eager to start on Plus One.

I liked Fama's characters. Sol is good-hearted, if a bit rash and naive. The plan she made up to steal her brother's baby wasn't exactly well thought of and I wasn't so keen on the way she was so cavalier about caring for the kid. It's a baby. You don't run around with a baby stuck inside your shirt. But I get that Sol was desperate and fueled by the love she had for her grandfather.

D'arcy is a Ray and the one who treats Sol when she accidentally-on-purpose maims herself as a way to get into the hospital. I liked the romance between the two, it was slow and well developed. I'm not gonna say anything more for fear of spoilers but D'arcy and Sol do belong together. There was a huge amount of uncertainty on whether their relationship would ever go somewhere because of the rules set in pace by their government. Ray and Smudge relationships are rare and it kept me on the edge because I was totally cheering for them.

I also enjoyed Fama's writing. She takes time with her world building and while I wasn't that keen on the plot seeing as how it revolved around babies - swapping babies, kidnapping babies - I was overall okay with it. I was able to predict some of the things that happened but that in no way detracted from my enjoyment of the book.

I'd recommend it to fans of dystopia. Oh I know, there is an abundance of YA dystopia out there and most of them blend into one another but this book manages to stand out somehow so give this pretty a chance.